[Benjamin Hopping was working for Fowler as a brickmaker at this time.]

The following article appeared in the Illustrated Sydney News 16 October 1865:

MR. E. FOWLER’S POTTERY.
WE have recently had the pleasure of inspecting the Pottery Manufactory of Mr. E. Fowler, situate at Camperdown, and must candidly admit that we were much surprised at its great extent and importance ; in truth we had no idea so extensive a business in pottery ware was carried on in New South Wales, and were highly gratified by witnessing the moulding and making up of various kinds of useful articles—such as drain pipes, ginger beer bottles, &c, and the extraordinary rapidity with which some of these articles were made by manipulation alone. It may be thought surprising that though situated at so short a distance from Sydney, so few of our fellow-citizens are acquainted with the existence of a manufactory of many requisites of daily life on so extensive a scale, and which has almost entirely stopped the exportation from England of such articles as can be produced here. 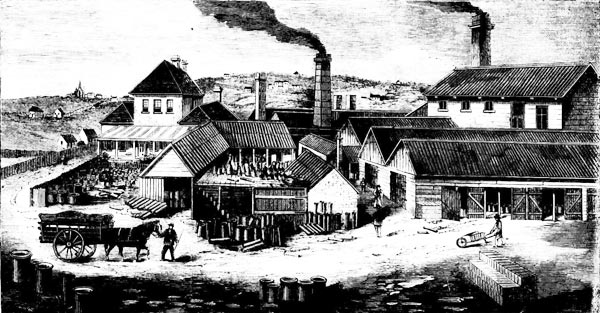 In the manufacture of drain pipes, the clay is put into pits, soaked with water, and after passing through a pug mill, is in a state called tempered, or fit for use. This clay is taken to another department and placed in an iron tube of two feet eight inches, and called the press ; a die, attached to a disc, is inserted at the bottom of the tube, the clay is then filled in, and a down-ward pressure, from a flat piece of iron driven by steam, forces the clay into the interstices of the die, and a drain pipe is delivered at the bottom on a flat board. The pipe in this state is merely in a rough state. It is then taken to another part of the premises and handed over, to the ‘thrower,’ who puts on the rim or socket, which is done entirely by hand on a horizontal revolving wheel ; the pipe being in a moist state, the rim readily adheres to it, and it is then carried to the stove to dry, preparatory for the kiln. When placed in the kiln salt is thrown into the fire, which produces the glaze which is perceived on the pipes.

There are a number of buildings not shown in our sketch, which form a part of the works, such as kilns for making fire bricks ; and places for machinery, such as rollers, elevators, pug mills, used in the manufacture of paving bricks, oven tiles, &c. The whole machinery is driven by steam power. The drain pipes alone at present made here in one week would extend half a mile, but the capabilities of this establishment would produce five times that amount. The number of hands constantly employed is about twenty-five. A visit to this interesting manufactory would not be uninstructive to many who forget that no matter how much we know there is still something to learn.

The following article appeared in the Illustrated Sydney News 24 January 1880:

THE POTTERY WORKS OF MESSRS. FOWLER AND SON, AT CAMPERDOWN

THE well-known brickmaking and pottery works of Messrs. Fowler and Son, at Camperdown, are in some measure typical of the steady growth of colonial manufacturing industry.

Commencing forty years ago in a quiet, thoroughly practical, manner, in a spot off Parramatta Street, at a period when the dwellings which now line the broad and busy thoroughfare were few and far between, the rapid progress of the business necessitated its removal to the Glebe, and subsequently to its present locale at Camperdown, where the works, which are, as shown in our engraving below, of a most extensive character, cover an area of five acres, of which a considerable portion is covered by the necessary workshops, kilns, and other buildings.

In the rear of these are the pits from which the clay is obtained, the supply being practically inèxhaustible, although the hardness of the soil below a certain depth frequently necessitates the use of blasting powder. From the clay pits to the place where the clay is worked, a distance of seven hundred yards, a tramway has been laid down, whereby a considerable saving of time and labour is effected, the clay as it is got and mixed being put into trucks, which are drawn along the tram-way by means of a strong wire rope wound upon a huge drum made to revolve by steam power. On reaching the shop, the truck is made to stop over an opening in the floor, and a catch being released the bottom of the truck opens, allowing the contents to fall through. This done, the empty truck glides down the incline to the pit where it is speedily refilled. The opening referred to, forms the mouth of the disintegrator, a powerful machine in which the clay becomes ground to a fine powder.

If the clay be required for making bricks it is passed on to an ingeniously constructed brickmaking machine, where the material, a fine clay powder, is dry pressed into the requisite shape, after which the dark looking masses of brick are taken to the kiln for the purpose of being burnt. Fire-bricks and chequer tiles are made in a some-what similar manner.

The manufacture of drain pipes constitutes a large and important branch of operations at the works, a tougher kind of clay, somewhat approach-ing to pipe-clay, being used. Ginger beer bottles and articles of pottery properly so called, are produced here in large quantities.

The dexterity of the workmen employed is astonishing. A single workmen can turn out four gross of gingerbeer bottles a day, that is at the rate of one per minute. Nothing is wasted in the works. Even the broken pottery is utilized, being ground up and mixed with the clay for making drain-pipes, whereby the latter are prevented from blistering or cracking. The motive power at the works is supplied by a large, and powerful steam-engine, one of the finest in the colony, and constructed for the Messrs. Fowler at the Atlas Foundry.

Our illustration affords a good idea of the general appearance of the works, but it is impossible to fully realize the busy character of the scene to be witnessed in each department save by actual inspection. The number and variety of the articles produced is almost incredible. Everything which can be fashioned in clay is made here, every care being bestowed on the construction even of the humblest article, and herein is to be found the secret of the success of the Camperdown Potteries, wherein the good old rule – “whatever thou hast to do, do it well” – is practised both in spirit and in letter, thereby affording a bright and encouraging example to all engaged in the useful work of developing colonial industrial enterprise.