[Sarah Ann Hughes was my great-great-grandmother]

Sarah was the daughter of Mary and brickmaker Thomas Francis Hughes. She was born in West Drayton on 29 March 1838. 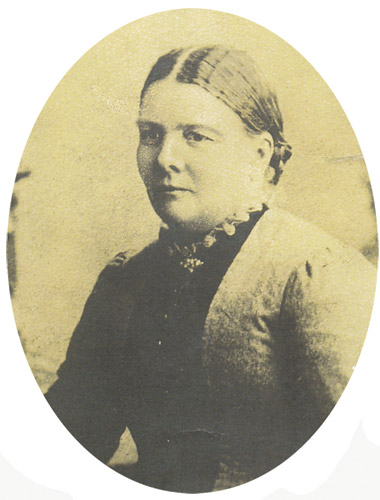 Sarah was under age and living in Essex when she married Benjamin HOPPING at St John the Baptist Church in Hoxton on 29 July 1855 – 5 months before they sailed for Australia.

Their marriage was witnessed by relative, George Hughes and Mary Gill, who made her mark. 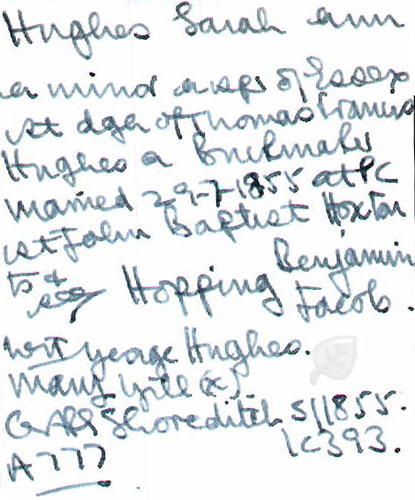 Five months later they set out for Australia on board the Maitland. It is hard to imagine just what the 5 month voyage would have been like for Sarah who was already expecting their first child. They arrived in SYdney on she gave birth to a daughter, Hannah, 6 days later.

Looking after her family must have been quite a task. Over the years the Hoppings moved a number of times and had the following children:

The following article appeared in the Darling Downs Gazette in 1918:

175 DESCENDANTS at 80th BIRTHDAY
Mrs. Sarah Ann Hopping, of ‘Drayton,’ King’s Road, Five Dock (Sydney) who celebrated her eightieth birthday on April 15, can claim in her long and useful life no fewer a number than 175 descendants in a direct line. These include her own immediate family of eight sons and eight daughters (only     half of whom— five sons and three daughters survive), 72 grandchildren, and 87 great-grandchildren. There were over 200 relatives present at her last birthday party.

Hale and hearty at 80, Mrs. Hopping can still read, write and sew; and she volunteered with a twinkle of grey eyes     which age has not dimmed to any appreciable extent, “thank God my hearing is still good. The best thing in all the world is good health, and although I had to work hard in my time with the care of a large family and an invalid husband for 25 years, I have always had good health until quite lately”.   Mrs. Hopping is the widow of the late Benjamin Hopping .

A native of Drayton, England, she sailed for Australia late in 1855, and the trip occuping five months. she did not reach Port Jackson until the year 1856. “We went Marrickville first”,’ she ex-   plained, “and it was then quite a bush so much so, in fact, that plenty of firewood was available at the back gate. For 44 years 1 have lived in the Five Dock district, and for 38 of them in my present home.”

At the birthday party all the surviving sons and daughters, viz., Ald. Charles Hopping, and Messrs. Tom, William, Robert and George Hopping, and Mesdames Lawyer, Correy, and Dayhew, were present to be photographed with their mother at the old homestead.

“I have two grandsons and one great- grandson fighting in France, ” concluded Mrs. Hopping with pride, “and one grandson who returned wounded and went back to London to work for the Y.M.C.A.”

Sarah Hopping died on 14th September, 1918 and is buried with Benjamin. Her funeral left from Kamiri, Kings Rd Five Dock , the home of her daughter, Alice Correy

“She Hath Done What She Could” 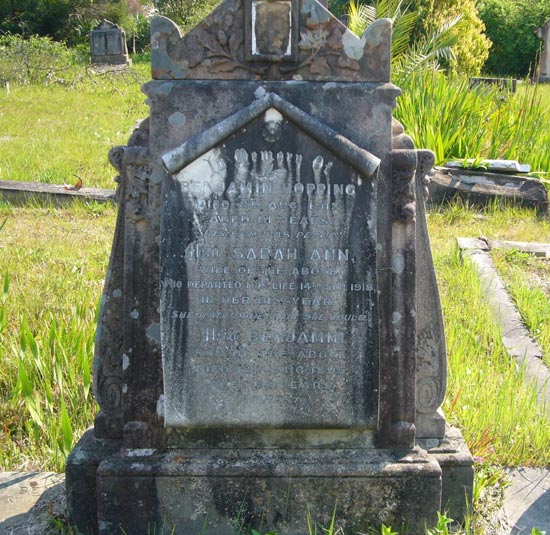