[Basil Carlisle Low is Jim’s father. This is his early story, based on his own writing.]

Basil Carlisle Low was born in “Tamora Cottage”, just above the old Princess Theatre in Dunedin, New Zealand, on 28 May, 1889. He was the second son born to David Brown Low and his wife, Jane Caroline Flanagan. Temora was the home of Grandfather and Grandmother Dallas (Jane’s mother).

When Basil was 4 years old, his father was promoted to General Manager of the Christchurch branch of Kempthorne Prosser and Company’s New Zealand Drug Company Limited, the largest drug company in New Zealand. The family rented a rambling old house on 5 and a quarter acres in the country, called “Riversleigh“, situated 2 miles from the centre of Christchurch at Avonside. From here Basil started kindergarten.

Riversleigh, the Low family home in Christchurch, New Zealand. Douglas in the foreground.

His father often indulged in the Tattersalls Sweepstakes, the big Australian lottery. At one time, despite drawing the favourite, Maltster, his horse was “pipped at the post”. Second prize, however, was the grand sum of £2,250. Half the win was used to buy “Riversleigh” which they had grown to love. The rest was spent taking the now family of six on a holiday to Sydney (parents and 4 children – Lindsay, Basil, David and Dorothea).

After staying in hotels during their trip to Australia, David Low Sr was convinced that there was money to be made in the hotel business and on their return to New Zealand, he decided to set up a guest house. David Sr had a flair for advertising and produced well-printed, attractive publicity brochures for their venture. Basil’s mother had a talent for organising the anything from 60 to 120 guests that stayed. But despite all this, and the fact that Riversleigh could supply at least some of the food they required, there was not a fortune to be made.

While the Low Family lived in Riversleigh, once a week the family went to town for an outing by horse drawn bus.

Reminiscing on her return there in 1977, Dorothea said:
“They were such happy days. Daddy was a kind indulgent playmate kind of father who encouraged us to enjoy lovely things. He would take us to the cathedral, to the public library to read, to the gardens and then to Broadways for pies and cakes.”
(article: Return to Christchurch after 52 Years” Womens News and Reviews,, The Press, Sat Oct 24, 1970)

Sadly, when Bas made a return trip there in 1968, Riversleigh had been demolished.

It was during this time in Christchurch that Basil attended the Boys’ High School, where he remained with his two brothers, Lindsay and David, until the age of 13. It was while the 3 boys were studying for their Matriculation Examination that the eldest, Lindsay, died. The family was devastated. Their father subseqently withdrew Basil and David from school. He considered that the boys were advancing too quickly and they were given a 12 month respite, during which they had time to decide as to the future and what trade, if any, they would like to follow. 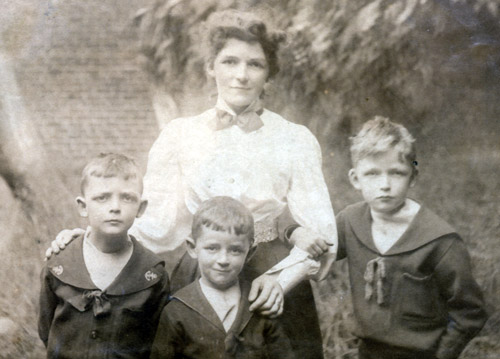