In Search of the “General Grant”

The Family Story
“In 1866 the American fully-rigged ship, General Grant, with £50,000 worth of gold and a passenger list of miners bringing home their piles abroad, set sail from Melbourne to London.

“For some unexplained reason, she passed away south of her intended course and found herself before the Auckland Archipelago with a falling wind and a heavy swell on the sea. In the murky night the doomed vessel was caught in the currents near the rocky shores of Adam’s Island and sucked into a cave. 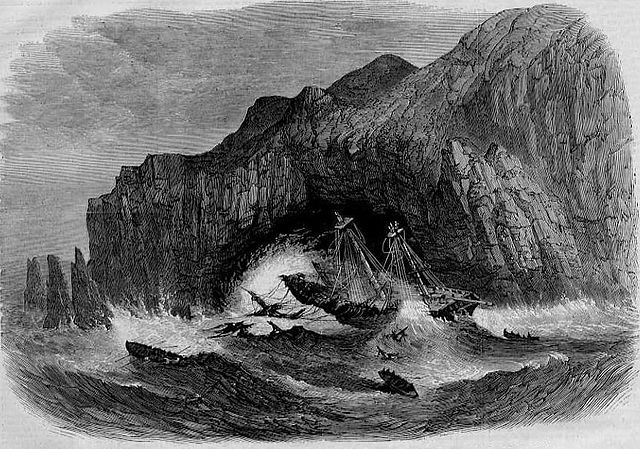 The rise and fall of the swell within caused her tall masts to punch against the roof of the cave and finally drove the mainmast clean through the keel. The vessel sank within five minutes with great loss of life.

As might be expected, the idea of all that treasure lying on the sea floor of that cave inflamed the imagination of adventurers everywhere. Expeditions were fitted out, steamers were charted complete with divers At this point the story, as handed down by Dad to us children, becomes a little woolly and tinged with fantasy.

“Grandfather Low [Alexander], it seems, went into a huddle with a syndicate of kindred spirits to hatch mysterious plans for an attempt of their own. All the expeditions were said to depend upon the indispensable help of a certain survivor who alone could guide the adventurers to the right spot.

“Grandfather’s syndicate had made special arrangements with this survivor. But just as all was ready and steam was practically up, the survivor was found dead in his hotel room. The question arose: Should this stop the intrepid syndicate? Never. Off they go into the blue, Grandfather Low’s bushy beard waving in the breeze.

“After many months, long overdue, the vessel steamed back into Dunedin Harbour. But how changed. Except for the shell and essential portions, of her deck, practically everything wooden had disappeared, burned up for fuel to enable the company to stay away so long and then get home. The great curiosity aroused by this exploit was not gratified by any sensational revelations from members of the syndicate. who had evidently agreed among themselves to keep their mouths closed. Even Grandfather Low observed the rule of mum’s the word’ to his family. But it was darkly hinted by disappointed neighbours that after a few weeks all those who returned seemed to be leading suspiciously rich lives, wearing new clothes, smoking big cigars, drinking expensive drinks and riding freely in smart carriages.. It was certainly true that Grandfather Low had a great beano.”
[Low’s Autobiography ppl 1-12]

The Gazelle Searches
During the first half of 1877 Alexander Low was on a 4 month “foreign” voyage on the Gazelle. He sailed on January 9 as an engineer from Lyttelton, returning to the port at Bluff Harbour on May 16. He had made other voyages on the Gazelle.

Note: The Gazelle was a barque and it made frequent trips to Sydney. Most of its trips were from the Solomon Islands and passengers included Solomon Island natives. It was listed as a Sydney ship. Although there were lists of crews, no engineer appeared on any of the lists. Among the Gazelle’s known voyages were:

It is possible Alexander spent some time in 1877 whaling on Macquarie Island in the Antarctic, but this is to be confirmed.

On its return to New Zealand the Gazelle made preparations for a 4 month search for the General Grant. It sailed in July with an engineer on board. It is possible that Alexander was that engineer. The Gazelle returned in November.

The Iron Age Syndicate
On 24 June 1877, just after his return from his trip on the Gazelle, Alexander joined a syndicate to buy the steamer, Iron Age.
Is the family story true?
Was this the ship they used in their search for the General Grant?