Jean Dallas, aged 29, sailed from Bordeaux on the “Jeanne”, arriving in Australia in late September 1857, Like many others he tried his luck in the Australian goldfields before settling in Melbourne.

The following year (1858) in Melbourne he married Susan Clara Booth, a 24 year old from Winchester in England. Susan had been named after her mother and was the daughter of James Dyer Booth.

It was on April 7, 1858 that the new Melbourne Grammar School opened. Perhaps this is also when Dallas started teaching there when it was known as the Church of England Grammar School in St Kilda Rd.

In 1859 their first daughter was born in Melbourne. They named her Mary Eudoxia Lindses Dellas. It is presumed that her name Lindses was in honour of John’s sister who married the tenth Earl of Lindsay of the Byres.

In 1861 they had another daughter, Jane Clara, in South Yarra but sadly she died the following year.

A son, John Bethune, arrived in 1863 and in 1865 their third daughter was born. They named this child Jane Clare Susan in memory of their lost baby. This child was to be known as Jeannie and one wonders whether her name was taken from her father or the ship on which he arrived. In the intervening year (1864) he was teaching French Literature and Drawing at the Ladies College in South Yarra*, while also working at the Grammar School. At this time they owned a 3 roomed home in Punt Rd, South Yarra, in the city of Prahran.

As mentioned, during the time the family was settled in Melbourne, John Dellas took up a position at the Church of England Grammar School (now Melbourne Grammar School) teaching French. The headmaster was Dr Bromby who was appointed when the school commenced in 1858. Dr Bromby’s aim was to instil “good learning” in his pupils. The school has produced Antarctic explorers, musicians, actors, the first Australian artist to be admitted to the Royal Academy and many distinguished Australians as well as 3 prime ministers. One of these who impressed John Dellas even as a boy by his smartness was Alfred Deakin*, born in 1856, who became Australia’s second Prime Minister in 1903. His talent for writing saw him write a 5 act play at the age of 18 and while practising law as a barrister in 1878 he also worked as a writer for the Age and Leader newspapers.

During his time teaching at the Grammar School in 1868, Dallas wrote a text book, “A Key to the Pronunciation of French – as spoken in Paris”, published by H T Dwight of Bourke St East, Melbourne. 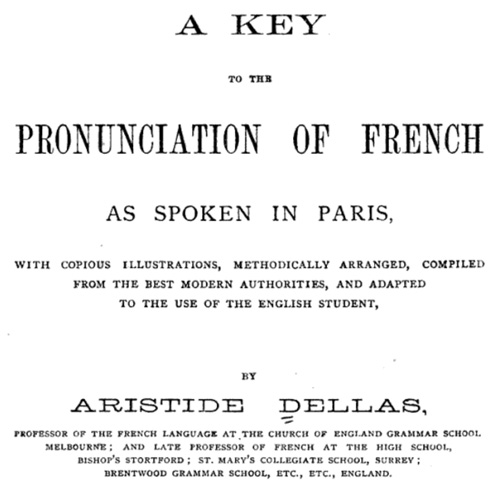 While teaching at the Grammar School, John Dellas also taught French privately (his pupils included Madame Melba) and at the Kew High School which is now Trinity Grammar School. Interestingly, the head of Kew, John Henning Thompson, was a pupil and then a Master at Melbourne Grammar School (1864-1869) during Dallas’ time there. He resigned from from the school in 1875 and took over Kew High School (for boys) at the age of 32.

Despite the birth of his 5th child, Blanche Elizabeth Dellas, 1870 was a devastating year for Jean Aristides Dallas.

With ill health “occasioned by working and exposure on the goldfields”, Jean left the Grammar School and sought work as an artist as he struggling to look after his family in Emerald Hill. Unfortunately a promised position as a teacher of drawing etc at St Patrick’s College fell through and, with “mounting debts from losses in mining speculations”, he was declared insolvent by the end of 1870.

[NEXT: Jean Dallas in New Zealand]

Jean Aristides Dellas taught here in 1863-4 while also teaching at the Grammar School in St Kilda Rd. He taught French literature and drawing.

The school began in 1857 in a bluestone home called ‘Lauriston House’ in Piper Street, Kyneton and moved to South Yarra “near the Punt” in 1863, the year Dallas was teaching there. It was run by “the Misses Thompson” – Caroline and Louisa. Professors from the Grammar School in St Kilda Rd would attend classes there daily.

In her autobiographical note, published in ‘Records of the Pioneer Women’ towards the end of her life, Catherine Deakin, Alfred Deakin’s sister, records that she was for ten years a pupil at a school run by the Misses Thompson. She attended the school initially in the central Victorian town of Kyneton, and later when it moved to the Melbourne suburb of South Yarra in 1863.