Basil Low 6: The Franking Machine between the Wars

When Basil was discharged from the Army in November 1918, he did not re-apply to join Mr Moss’ company as it was “in a bad way and was slowly going down hill as work was generally non-existent”. The following February he  was employed by Hutchinson’s Scales Australia Ltd to construct Patent Automatic Weighing Appliances. The company was in Dundas Street, Christchurch. At the same time Basil formed a family syndicate to work on several of his own ideas in his own well equipped workshop.

Mr Moss’ company was by now in liquidation and was being reformed by the Liquidator,  Mr Gilby. He appointed Basil as assessor for 6 weeks prior to Basil’s leaving for Auckland, and paid him £5 per week. Basil offered to represent Mr Moss’ machines in Auckland with his own business and so was appointed sole agent in sales and service for the Auckland Province, for the Automatic Franking Machine Company. He held this position for three  and a half years.

Basil arrived in Auckland at Easter and found a room in a new building right opposite the Post Office. This was the real beginning of his own company, The Machine Appliance Company. He had a telephone connected and hired a girl to attend to calls and office details. Business “boomed”. He hired a young mechanic who had previously served in the Typewriter company.

As he thought it would be a tremendous gain to “break into the typewriter business”, he secured an agency from the Remington Company for their machines and supplies. This was so successful that he had to engage another full time mechanic to service typewriters.

All this took place “in a matter of a few months” and expansion took place at an astounding rate. Despite hostility from long established firms, he moved into adding machines, duplicators and second hand cash registers.
Dealing in second hand typewriters was also hugely successful. He periodically advertised in the daily newspapers:

This advertisement gave wonderful results. It was necessary to reserve one day a week to go out on a spending spree. He was now making “real money” as he said:

“Never will I forget making £93 in a week from the sale of second hand typewriters alone.”

By October Basil sent a letter to Hutchinson’s Scales asking for a reference. He did not have to wait long for a reply. They wrote back praising his abilities and wishing him luck. Needless to say, they enclosed a reference.

During the following seven years Basil established himself in Australia, concentrating on his many inventions, including the Automatic Perfume Fountains.

However, in the early part of 1927 Basil received a long letter from Mr Gilby,who had re-formed Mr Moss’ liquidated franking machine company. He asked Basil to accompany him to Melbourne in order to submit their New Zealand and English machines to the Postmaster General’s Department.

“I cabled my reply accepting the proposal. . Both machines were consigned to me at my home address and I was to make myself familiar with both. I was not very impressed with the English model which was a great big outfit and anything but attractive.

In due course I received a telegram from Mr Gilby requesting me to come to Petty’s Hotel where he was staying and prepare the plan to be adopted in Melbourne. On arrival in Melbourne he got in touch with the department and appointed a time for the demonstration, which was for the following morning.

After the song and dance was over, it was reported that they would approve the New Zealand model if it was fitted with a cancellation die. Mr Gilby was very concerned about this when I told him there was very little space to incorporate such a die. To save time, he asked me to consider undertaking the work and I had mixed feelings when I accepted £10 a week for as long as it lasted.

Gilby decided to stay in Melbourne and Basil returned to Sydney to commence one of the most complicated jobs he had ever undertaken. While he worked on gradually solving the problem, Mr Gilby found out that the Christchurch factory had been working on the same problem.

“Mr Moss was very angry with Mr Gilby for ignoring him in the matter and he was going to show em’ who could do the job. He was sending a young chap from the factory with his machine and I was not to accompany Mr Gilby to Melbourne as his mechanic was sufficient and knew his machine. But he didn’t know mine! Mr Moss was daggers drawn with me. How dare I work on his machine!”

Mr Gilby by this time was also very annoyed with Mr Moss, particularly when he received a cable telling him to terminate Basil’s engagement, along the following lines:

Basil was almost finished his work and the receipt of the cable united Basil and Gilby.

“The mention of the big works raised a laugh, for anyone could see that its mention was included to impress all and sundry, excepting only Mr Gilby and myself. It was a childish reference, to say the least, and suggested that someone was imbibing a little too freely.”

At this time Gilby had more power in the company than Mr Moss and was able to ignore him completely. When the young apprentice arrived with “the big works” Basil again went to the Petty Hotel to examine the new machine.

“My expectancy was greatly relieved when I gazed upon and witnessed the operation of this product of the big works. Nuff sed!’

When Gilby in turn saw Basil’s machine in operation, all agreed it was superior. Both machines were submitted to the Postal Department in Melbourne and Basil’s was the one approved. Soon after this episode Mr Moss went into retirement.

On October 14, a telegram arrived from Chartres Ltd who had received notice from Universal Postal Frankers, London, that they were to get in touch with Basil for him to submit the “Midget” to the PMG’s Department. Mr FA Chartres had secured the agency for this machine while he was in London and Basil was the only person with any knowledge of such a machine. Basil agreed to present the Midget for approval and manage the new department which would be created. Chartres was the biggest office appliance company in Australia.

The following month Basil was appointed Manager of the new Franking Machine division on a generous salary + 2O% commission and expenses. He was to handle all of NSW and once a month had to report to the Board of Directors. His first task after gaining approval for the Midget from the PMG, was to “prepare suitable literature for distribution among likely prospects”. He made over 90 courtesy calls, without the machine, in 10 days. He was able to arrange numerous demonstrations which resulted in a reasonable number of sales.

He had the thrill of selling the first franking machine to a business house in Australia.

In June 1928 while  employed by Chartres Ltd as Manager of their department controlling the sales of the Midget Franking Machines in Sydney, Basil attended the Business Efficiency Exhibition at the Sydney Town Hall. He attended again the following year as Chartres’ representative. This followed his demonstration for Dangar Gedye and Co Ltd by Chartres Ltd of the “Midget 3” Franking machine with a sealing device. Chartres now advertised that the Midget and the Universal Envelope Sealer made “ideal companions”. 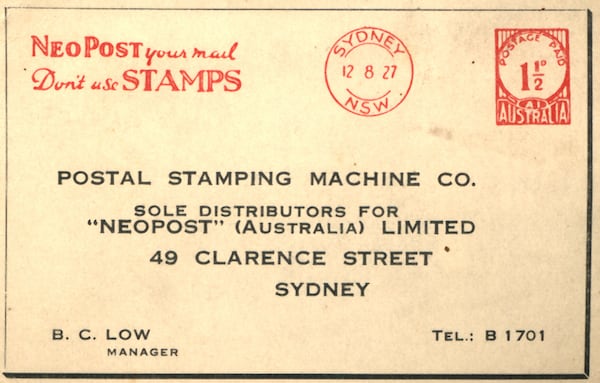 Midget sales were still very satisfactory when Basil received a letter from Chartres’ opposition franking machine company, Neopost Australia Ltd, asking him to call on their Managing Director. He was offered the management of this company with a handsome salary and 20% sales commission throughout the Commonwealth. He was sorry to leave Chartres, but could not pass this opportunity by. He was given a free hand to re-organise the business as it was in a mess. He called a Directors’ meeting 6 weeks after taking over and they were so pleased with the progress he had made in such a short time that they also made him Secretary and Publicity Officer.

“In the block bounded by the Quay, Pitt Street, Martin Place and George Street, I had secured orders for 9 machines. This was quite beyond expectations.”

By early January 1930, Basil had a reference stating his qualifications and background concerning Neopost and the possibility that he take over the management of the company in NSW or Australia.

By November his father, DB Low,  was acting for Basil in London as his “go-between” with Neopost International. David B received a letter from them at his home at 30 Woodstock Rd. Golders Green  about Basil’s desire to market Neopost in Australia. Basil had taken over Neopost Australia but Neopost International said they wanted to talk to DB about the fact that they had had bad experiences with Neopost Australia in the past.

On September 10 1931, Basil approached Chartres Ltd about sole distribution rights for the Commonwealth of Australia for the Envelope Sealing machine.  Chartres immediately accepted, granting him the sole agency with modifications. Chartres added one condition to his having sole agency and sent him £15.
On September 24  Basil accepted the £15 and the extra condition and with that, Chartres paid for 7 Envelope Sealing machines. 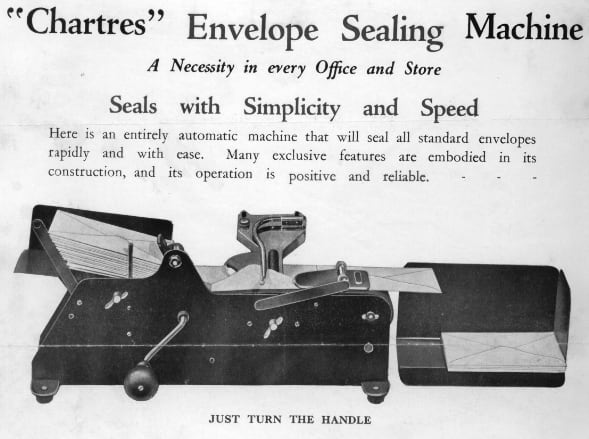 Mid way through 1938 Basil gained exclusive control of Neopost and by September 20 he was the Service Manager for the Postal Stamping Company.

During 1939 Neopost was solely distributed by Basil’s Postal Stamping Company which was located at: 49 Clarence Street, Sydney [the same address as Dominion Mail Orders]

[box type=”bio”] NOTE: Much of the information in this article can also be found in Richard C. Peck’s History of the Franking Machine in Australia (Volume 1 and 2). Our thanks to Richard for all his valuable work and the many hours he spent with Basil.[/box]