[Benjamin Jacob HOPPING was my great-great-grandfather]

Benjamin Jacob HOPPING was born in Bedfont, Chelsea,Middlesex, England. He was the 4th son of Hanna RACKLIFF and Daniel HOPPING (and grandson of Edward HOPPING and Jane FAIRFAX) . He was born on 18th September, 1832 and grew up in the Church of England faith. Like his brothers, he followed in his father’s occupation and became a brickmaker. Brickmaking was a common trade in London in the mid-nineteenth century. 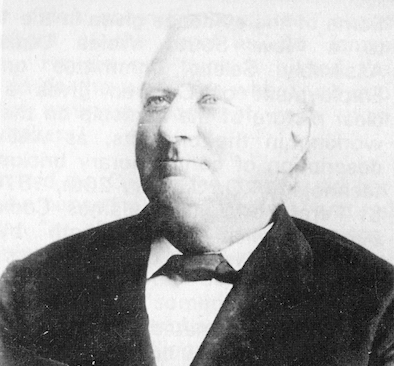 On 29th July, 1855 at the age of 23, he married Sarah Ann HUGHES at St John the Baptist, Hoxton Church,Shoreditch, LONDON.

Later in 1855 Benjamin’s brickmaking firm decided to send him to New South Wales to test the clay for pottery. Thus, on 16th December, 1855, Sarah and Benjamin sailed from Southampton on the Maitland, bound for NSW. They arrived in Australia on 24th April, 1856. By this time Sarah was expecting her first child. Perhaps they were greeted on their arrival by Benjamin’s brother William (also a brickmaker) and his wife Lavinia. They had arrived in 1853 and were living in Sydenham. Six days after their arrival Sarah gave birth to their daughter, Hannah, on April 30th, 1866 at Waddell’s Bush, Sydney.

Unfortunately Benjamin’s report back to his company in England was not favourable as the clay was unsuitable for pottery. So he set out to make his own tiles but later changed to bricks. The little family moved to the Maitland area where Benjamin’s older brother was already living. Their next child, Thomas, was born there in 1858 at One Mile Creek, EAST MAITLAND.

By 1859 he was in Redbournberry in Singleton in partnership as Zarah and Hopping, advertising their offer to make any quantity of well burnt good quality bricks for railway constructors, builders etc in Singleton. They were the nearest brickwork to the town and convenient for cartage. They also made tiles, having 500 flooring tiles for sale in September.

By December 1865 they had returned to Sydney where their 6th child, Charles, was born at Camperdown.

It is said that with a contract to make 10,000 bricks, Benjamin acquired a land grant in Parramatta Road (where AWA now stands) and set up a brickworks but this needs to be confirmed as we know he was working for Mr Fowler throughout 1965. It is more likely he was contracted to work for Fowler to make the bricks.

During the 1860s he continued as a brickmaker, working for E Fowler in Camperdown and later the Australian Patent Tile Company.

Benjamin’s references from his early Australian employers
An advertisement in 1870 for the tiles made by the Australian Patent Tile Company described them as “very superior to either shingles, slate or iron, being more secure against fire; while the Tiles sparkle, yet have not a blinding glare in the summer time, lite COOLNESS (so essential in this warm climate) and WATERTIGHT PROPERTIES, independent of the architectural and painted-like effect of these Tiles, which figure so strongly and prominently, and form the charm of the Italian cities, has rendered the AUSTRALIAN PATENT TILE as popular in Sydney and the suburbs as it is in Italy.” Impressive claims indeed!

Benjamin moved to Ashfield area in 1874 and in 1875 moved into Henry Boehme’s original 3 roomed cottage in Church St Ashfield but by 1876 when Boehme sold his property to Faithful and moved to Iron Bark, the Hoppings moved into his newer two storey, 6 roomed iron roofed wooden house. 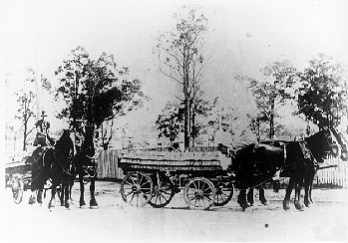 In their book, Working the Clays – the brickmakers of the Ashfield district”, Nora Peek and Chris Pratten state that “descendants of the Hopping family relate the story that one of Benjamin’s sons, Charles, worked at the age of seven at the kilns in Ashfield carrying buckets of water. As Boehme’ s kiln was not far from Iron Cove Creek, and as Charles was born in November, 1869, this story seems very plausible. It was a very common practice at this time for a large number of boys, and occasionally some girls as well, to be employed in the brickpits.”

Benjamin Hopping left Henry Boehme’s house sometime in 1880, and, “with the demolition of the kiln on Boehme’s land, he may have joined his son Thomas working for Thomas West”. The 1880 SANDS DIRECTORY has Benjamin is listed as “HOPPING AND WEST BRICKMAKERS – Parramatta Rd, Ashfield”

At the start of 1881, he purchased land on the corner of Kings Road and Cross Street, Gipps Town (later named Five Dock). With a mortgage from the Sydney Permanent Freehold Land and Building Society, he built the family a new timber cottage that he named Drayton. 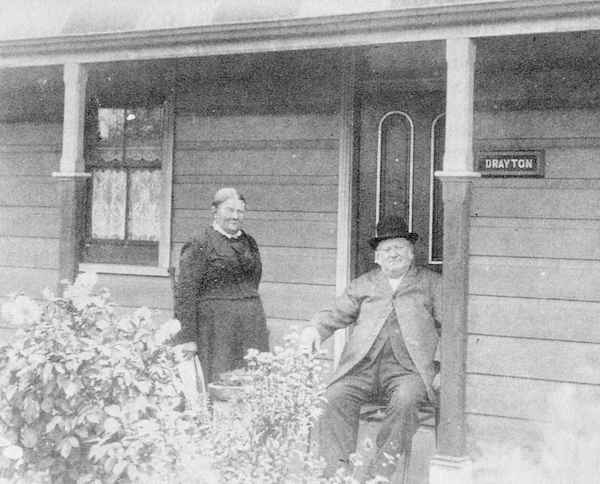 Sarah and Benjamin at Kings Rd, Five Dock
The ten years to 1884 would not have been an easy time for Benjamin and Sarah. Six of their infant children died between in those years and the made a number of moves in the district – from Enmore to Waterloo Flat (now Alexandria), then Ashfield and finally to Five Dock.

Ten years later, in 1891, Benjamin subdivided his land to the west and north of Drayton, creating five lots including Drayton – three in Kings Road and two fronting Cross Street. Benjamin transferred the title of these four blocks to his sons William and George were given the 2 in Kings Road) and Robert and Charles now owned the Cross Street blocks. Timber houses just like Drayton were erected on the blocks and four of the five cottages still stand there today. 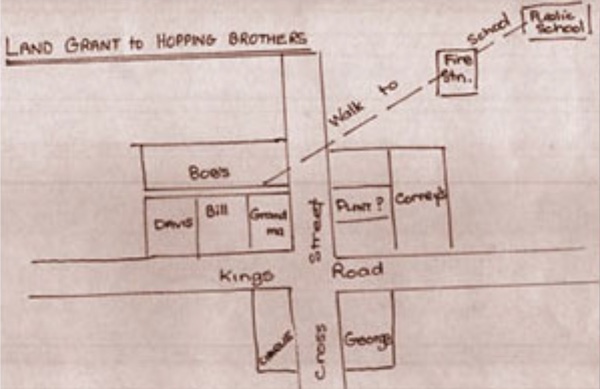 At some stage Benjamin injured his leg on a stick. Unfortunately it didn’t heal and he was an invalid for many years.

Benjamin Hopping died at his home, Drayton, on 8th August, 1913 and is buried in the Church of England portion of Rookwood Cemetery [Grave in section CCC No. 378].
Sarah joined him 5 years later. Benjamin Hopping was 81 years old and had 8 children, 70 grandchildren and 46 great-grandchildren.

“His End was Peace” 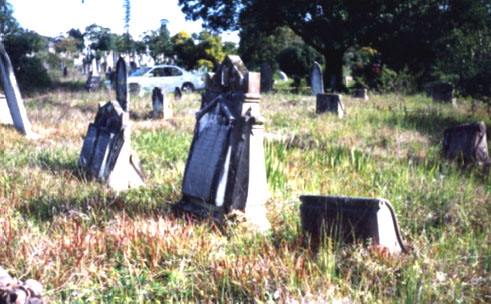 “He has gone, but not forgotten,
Nor will the good advice he gave.
Sweetest thoughts will ever linger,
Around my dear old father’s grave”
–In the SMH the following year by his daughter Hannah Dayhew