The Kreis Family from Switzerland 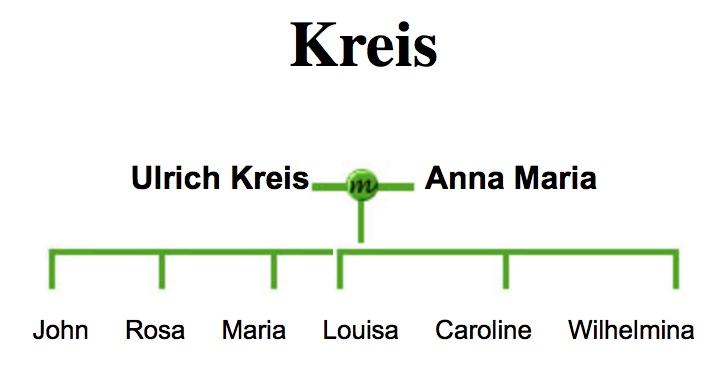 Ulrich and Maria KREIS (Mary) lived with their children in BASLE. Ulrich was a weaver by trade and designed and made badges in a ribbon factory in Basle. These ribbons and badges were for various Swiss organisations and sporting bodies.

Their daughter, ROSA and her husband, John MULLER, came out to Australia. After they had been here some time they wrote home to Switzerland, telling of the better opportunities in this new land, as Europe was now overcrowded.

Ulrich decided to bring the rest of his family to Australia. Their son, John. had died and their daughter, Maria, decided to remain in Switzerland (presumably with her husband).

So on 25th November, 1877, the Kreis family left Plymouth and sailed on the HYDRALRAD, bound for South Australia. They reached Port Adelaide on 17th February 1878 and landed on Australian soil on 26th February. As Ulrich had been a designer and weaver in Switzerland, he brought with him samples of his badges but as the country was still young his skills were of no use. Therefore he resorted to labouring jobs and the Kreis family were quite poor in their new home land.

Ulrich and his family settled in HAHNDORF in the Adelaide Hills. He died there in 1879 at the age of 62, less than 2 years after emigrating from Switzerland. His wife, Maria, died in Main St, Hahndorf in 1893 of acute bronchitis. She was 70 years old. Both are buried in Hahndorf Cemetery. 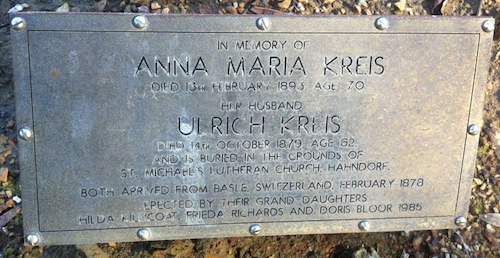 Rosa and John MULLER settled at Hectorville in South Australia. John worked for Samuel Davenport. Later they bought land at Myponga. Their son, Jack, worked and lived on this property until he died. His daughter, Elsie Williams was still living in 1979.

Louise KREIS married Tom MANSFIELD but she was widowed at an early age. Her son Herbert had a poultry farm and Louise herself had a shop. Later Herbert became head birdkeeper at the Adelaide Zoo.

Caroline KREIS married August FAERHMANN who was a blacksmith and wheelwright. they lived in Summerton in the Adelaide Hills.

Wilhelmina KREIS (Mina) worked for a South Australian family who were very fond of her. When they moved to Sydney in NSW in 1880 they took her with them. She was 11 years old. It was here that she met and married Robert HOPPING in 1891 at the age of 22.