The recognised age to commence a career in those days was considered to be 14, and Basil’s was decided one day when his father enquired as to his fancy. He had developed a tendency towards animals and farming along with an interest in things mechanical and electrical. Such varied interest did not please his father who warned that he should make up his mind, otherwise it would be “bricks up the ladder”?

It was finally decided that Bas was to take up Engineering and so he was apprenticed to an electrical engineering firm in 1904, a time when motor cars and motor bikes were becoming popular.

During the next two years Basil made steady progress and by 1906, when the International Exhibition opened, he had become a switchboard attendant. This was a responsible position and the Exhibition engaged him to control many of the important exhibits which meant that he had to be on constant duty. At this time he was earning the handsome wage of 15/- per week, under the terms of his apprenticeship but Basil felt that this amount was not good enough and the thought of finishing his five year apprenticeship and earning only 25/- per week did not appeal to him at all. Without his father’s knowledge, he decided to try to find some means of increasing his weekly total.

It so happened that on Christmas Eve 1904, when Basil was 15, his parents presented him with a motorbike. They were aware of his keen interest in bikes and it was through this new motor bike that he acquired a knowledge of motor engines and their operation. 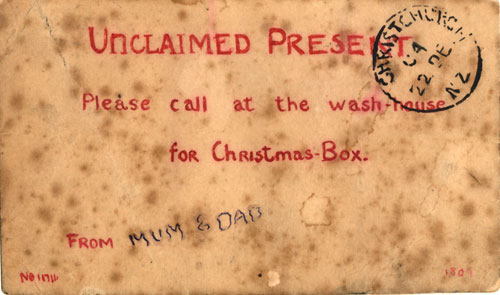 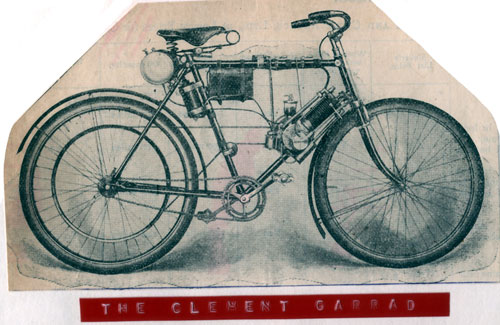 This knowledge was to prove invaluable as soon his friend, Edgar Douglas Pannell found him a position with the Exhibition Launch Company driving motor launches on the Avon River, the river running through the Exhibition grounds. He was able to appease his father with the information that he had jumped from 15/- per week to £2 per week.

Thus his father allowed him to stop his apprenticeship with the electrical company which, after all, was principally engaged in house-wiring installations and not in the manufacture of motors or dynamos, in which Basil was eager to learn.

When the International Exhibition finished in 1907, the launch that he was driving was sold to a Mr Pringle who was ignorant as to how it should be operated, so Basil was engaged to transport the launch to Lake Tekapo, a snow water lake 20 miles long by 12 miles wide. He was to receive £3 per week and was to be there for two months. Mr Pringle was a sheep farmer with two big stations on the lake and, having had 2 good seasons free from snow, he lived very well in a mansion in Timaru. Basil was to stay at the homestead with Mr Pringle and not with the shearers, who numbered 50 at the time. 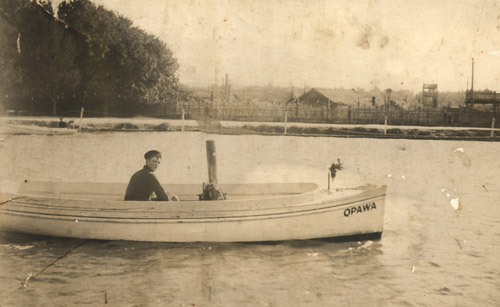 Bas’s home base, however, was always Riversleigh, which he loved. Once, when his mother and father had gone to Melbourne for 12 months, he was left alone with the rambling 13 roomed house. At the time he played a lot of billiards and coming home late at night, it was always an experience to push the big key into the front door as it made “a hell of a row manipulating it”.

The entry into the hall was also a memorable experience. After closing the front door, “another hell of a row”, and finding his way halfway along the main hall, he had to turn off at right-angles to enter another hall leading to his bedroom, which was fitted with trench windows leading onto a side verandah. These windows had to be open for air, and to permit the family’s old retainer, Jack, to bring him a “cuppa and toast” in the morning. Bas’s little bantam rooster and his two hens were also able to enter the room via the windows to get a crust and a few kind words.

One morning, after being out playing billiards with “the boys” the night before, Basil overslept and Jack had hesitated to wake him, so he had put the tea and toast on the table next to the bed, which had wooden sides. Joe, the bantam rooster became very impatient, jumped onto the wooden bed side and “started to crow his hardest”‘ Basil woke immediately and was full of apologies for keeping Joe waiting. This fright when alone in a big house like Riversleigh, was one Basil never forgot. 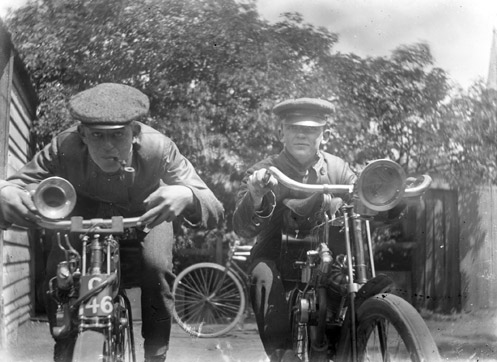 Bas and friend – probably Parnell. I don’t know what they are wearing but it looks like some sort of delivery uniform. 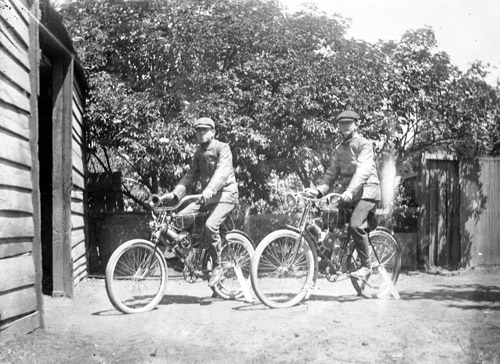 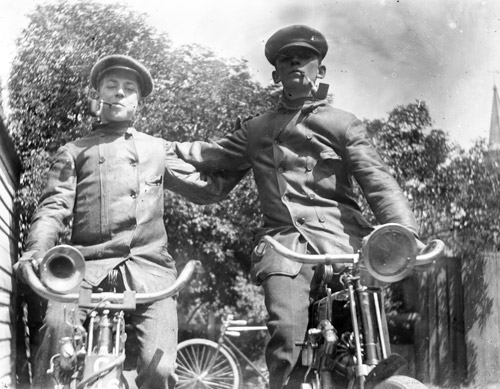