Not Guilty – The “Raid” at Castlemountain

Many years ago, about twenty residents of Quirindi and Castlemountain decided to have a picnic party on the mountain called “Castle”, about four miles from Quirindi.This was to be on a Sunday and there was to be kangaroo and wallaby shooting. Ammunition was plentiful. It was before the Germans started the 1914 war. 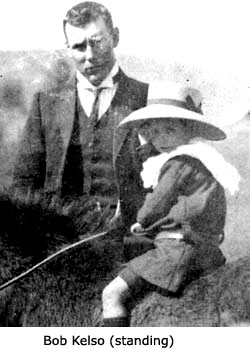 Some of the party were Dan O’SHEA and his son of the Terminus Hotel, who supplied the lemonade; Bob KELSO; Jack KELSO, Geo WORBOYS; Bert MILLER, a school teacher named MULHERON from Jacob and Joseph Creek; Bill POLLOCK; the goods clerk from the railway station (I forget his name) – no, not Charlie, it was long before his time; the head grocer from Tebbutt’s store, and a number of others.

Hearing that Sergeant WOODS had got wind of the party and intended to raid it, two of the party recanted. They decided to interview the sergeant and offered to do the raiding, if they could get the loan of a uniform. But Sergeant WOODS decided that it was too risky for him. However he advised them to see Don ALBERT of the railway station and borrow two of his coats with the brass buttons, and caps which were similar to the mounted police caps.
This done the two new police officers made for Castlemountain post office, where they were put through police drill by the postmaster, John FOOT. The main thing, John said, was to walk perfectly erect, with long steps and keep in step.

The newly trained officers arrived on the scene, and what a scatter!

Dan O’SHEA, as soon as he spotted the “police”, handed his gun to his son, telling him to never mind about the fine, but he did not want to lose his hotel license. Dan then dropped behind a big log and when the “police” passed he made off in the opposite direction, but was too big a target and too slow on the run to get away.

George, who had shot a wild duck, thinking of the double penalty of duck shooting out of season and carrying firearms on Sunday,, pushed the duck and the gun up a hollow log and made for the mountain, and was not caught.

MULHERON crawled up a hollow log until after dark. Jack KELSO made a bee-line for Castlemountain church, taking all the fences in his stride and hoped to prove an alibi by going to church, although the service was nearly over when he got there.

Bob KELSO came up to the police with a bunch of flowers , and said “Constable, I was only picking flowers.” He had no gun.

When all that were caught were rounded up none recognised the two “police”; in fact, they were all too scared to look the “police” straight in the face. The goods clerk wanted his real name kept out because the Chief Commissioner FRAZER would sack him. The head grocer also said he’d get the sack, because … (and here the newspaper clipping is torn off…)

[Note 1: The date of this newspaper article is unknown. It is possibly from the Quirindi Advocate and might be part of a series by Alfred Austin. If you can help us identify its origin and/or complete the article, please contact us or leave a comment.. We’d love to hear from you.]

[Note 2: Jack (b. 1880) and Bob (b. 1876) Kelso were brothers and both were born in the Castlemountain area near Quirindi where their father, Hugh owned land. In 1911, Bob owned Gaspard, at Joseph and Jacob Creek and Jack (Hugh John) ran Castlemount. Bill Pollock was related to them.]